Monika Mikowska, author of the blog I am.mobi and co-owner of mobile marketing agency mobee dick, set out a month ago to conquer North America – literally and figuratively. Her first trip to the U.S. is a step toward gaining clients overseas. What does mobile look like in Poland versus the West?

We can learn something from Americans, or maybe vice versa? You can find the answer to these and other questions by reading the interview with Monika.
Robert Rachwal: Monika, you recently returned from the US. You were also there for business purposes. Tell me if it is difficult for a Polish company to find a customer in the US?
Monika Mikowska: We haven't signed any contract yet, so I don't know yet if it's difficult 🙂 A service company will probably be more difficult than one selling a specific product, BUT… I always say that if you have a goal and strive for it, you will 100% achieve it. We from the beginning of mobee dick wanted to serve foreign customers, only now we finally decided to move our asses to them.

This was our first, but not our last trip to the US.
Did you prepare for the trip for a long time?
Yes. Mirek (Pośpiech, co-owner of – przyp. red.) he left for 2 months, I for 3 weeks. Serving Polish clients cost us a lot operationally, because his duties were spread over me and Bartek, which meant we had to work more.

We also had to postpone two internal projects until September.
This was Mirek's seventh trip to the States (my first) and his job was to refresh old contacts to earn business for mobee dick. Then I came and we already held the next meetings together. But you know how it is in new, unfamiliar territory – you have to meet with 10+ people for something to work out with one…
You preempted my question about success and customers, so I'll ask if you see any potential for Polish companies in foreign markets?
I can certainly see for mobee dick. When we showed our graphic designs, all the people were genuinely, sincerely impressed.
You are suggesting that there are no companies in Poland doing world-class projects?
I didn't say that. Rather, I suggested that Polish production can impress in the States and stand out 🙂
Is Poland far behind the US? Are there any areas in which we are better?
It seems to me that in several aspects the States are behind Poland. Np. mobile banking. We had an account with Bank of America, one of the largest banks in the world. We used this bank as normal users. You may be familiar with their app?

3 years behind the Polish design of banking apps 😉 On top of that, I'll also tell you the reaction of the sales advisor at the car rental company, when by his side we made a transfer from one account to another through the mBank app… The gentleman picked his jaw up from the floor, not knowing that this is possible and that the money goes immediately to the target account 🙂
Have you noticed any differences between Poles and Americans (e.g. They scan QR codes on a massive scale, while we don't?). Maybe we pay more on the phone?

Maybe there are some trends in the US that have not yet reached Poland? 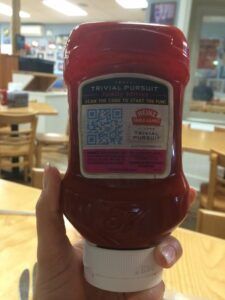 QR codes were present, of course, but in less intensity than in Poland and more sensibly placed. E.g. On a bottle of ketchup on a restaurant table. Under this QR code there was a hidden game to kill boredom while waiting for your order.

But nowhere did I see any person scanning QR codes. The US women's press is also not dripping with QR codes, so the unhealthy fascination with this tool is certainly not there.
On the phone we pay more we. It is the Poles who want to be clearly innovative in this area, while in the States it is the norm to use a card. There, absolutely everywhere and for everything you can pay by card. Even at parking meters in Beverly Hills!

I think that in the States it is too easy and „default” to pay by card, to suddenly force themselves on the novelty that would be paying by phone. But making purchases from US online stores and auction platforms via phone is much simpler and more fun. When it comes to e-commerce best practices, it is we who should learn from the Americans!
Besides, what we should immediately do in Poland to be truly mobile is to enable wi-fi everywhere. There in absolutely every single restaurant, diner, cafe, gas station where we were, there was wi-fi access. There have been occasional instances where it worked poorly, but nevertheless it was everywhere. This is the right symbol of „being mobi” = being online everywhere.

In Poland this is already slowly developing, so I think we are on the right track. In addition, the Wifi network is also available as part of your cable network (Time Warner Cable, xfinity from Comcast), in tens of millions of places scattered across the United States, it's incredibly convenient and modern.
And wi-fi as in Poland everywhere is on a password, which you have to ask for?
Just please let's not get into a discussion about security 😉 Mostly passwordless – also city wi-fi, e.g. on the beach in Santa Monica. Urban internet that doesn't cloud up? Can you imagine that?! 🙂
As with websites? Adapted?
Websites – those we had a need to enter as tourists (i.e., to check address, phone number), rather seamlessly. But with corporate, company websites is already much worse.
I remember a picture suggesting that Americans would first tweet about the fire and then evacuate. Actually it does? Does the average American not part with his phone and looks at it all the time?
(Depends on which city the resident is and how old he is. Teenagers in New York are staring at the screen of their iPhone’a (yes, iPhone’a, in the States it is the absolutely dominant phone model across all age and social groups). And they are sitting on Twitter and Instagram. Very rarely did I see Facebook over someone's shoulder.

In big cities you see more people staring at their phone screen. In smaller – less. But it's nothing revealing, just like in Poland.
Specify in one sentence the thing that shocked or scared you.
Or maybe one that made me fall in love with the States? 🙂 The mentality of the people, their openness, absolutely positive attitude, natural willingness to help, if only in passing the contact on, to a more interested/concerned person, in a word, a completely different business culture. This is indeed a unique country. It will be pleasant to have business partners here.
When is the next trip?
Most likely next year. And abroad in Europe later this year.
You are on your way to get more customers? What market this time?
We will go somewhere to a conference or trade show, exhibit and show our portfolio. But we'll brag in the media when there's something to brag about, for now I'd rather "not beat around the bush" 😉
We wish you good luck 🙂 Thank you for the interview.