ComScore report: apps generate more than half of media traffic

According to a report prepared by the ComScore service, mobile usage accounts for a total of 60% of total time spent using electronic media. This is an increase of 10% over last year. While such an increase does not seem unusual, it is noteworthy that it is mobile applications that generate more than half (51%) of this time. 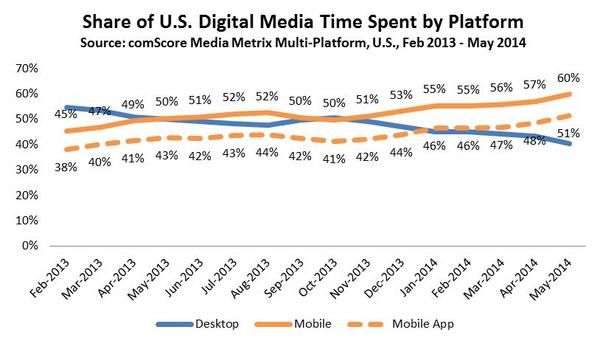 The study also analyzed what type of content „steals” the most time from mobile users. Some categories have proven to almost completely hijack user affection, compared to desktop activity. Radio took the first place, as this medium is used on mobile devices by as much as 96%, while desktop is used by only 4%. Ex aequo located photos.

Third and fourth place belong to maps (Google Maps and Apple Maps are leading the way) and communicators (mainly Facebook Messenger, WhatsApp, Viber, as well as others), which accounted for as much as 90% of the.

When it comes to social networks, in their category as much as 70% is mobile traffic. They generate 20% of total traffic spent using electronic media. Below is evidence of the relevance of social media in mobile channels: 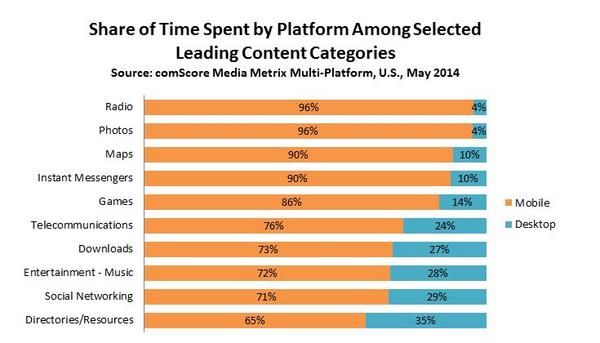 Popularity and time spent using mobile devices continues to grow. Smartphones and tablets have not only become our „second” screen, but in fact they have already taken over the role of the first screen for us. Televisions are slowly receding into the background as a medium with a one-way communication model. So far, their place has been mainly taken by computers, but it appears, however, that these too are slowly being replaced by smaller, mobile screens.

These are signs of the fact that we are entering an era of total mobility.